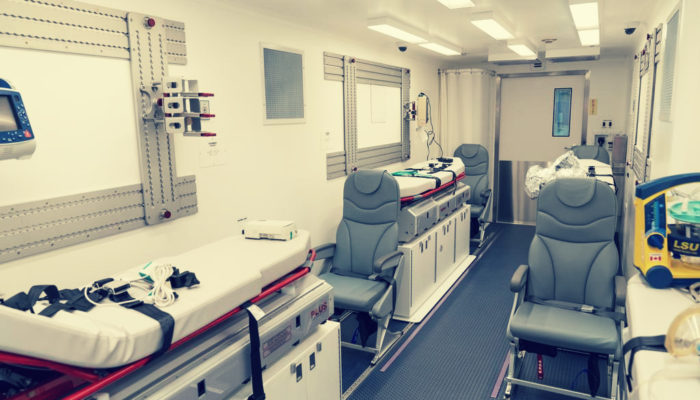 By Article Editor
Recent Posts
Last modified on May 25, 2022 No Comments

After a medical transport aircraft reached its destination, it was removed from service and thoroughly decontaminated. However, with complete eradication of the virus not guaranteed, the market need for aeromedical bio-containment on future flights was undeniable.

When air transport is concerned, San Antonio-based OEM, Knight Aerospace, is known for specializing in “roll-on/roll-off” aeromedical modules that provide an effective solution to health and safety concerns. Often referred to as “flying ambulances” or “mobile emergency rooms”, Knight Aerospace’s aeromedical modules, such as the Aeromedical Bio-Containment Evacuation Systems (ABES), are scalable to any cargo aircraft and adaptable to meet unique customer requirements.

Elevating Conditions for Patients and Doctors

Medical transport flights delivered very infectious patients, injured military members, and civilians, to well-equipped medical treatment facilities. Conditions aboard these flights were difficult for both the patient and medical personnel who attended them.

Conditions were also challenging for patients’ doctors. They were faced with caring for very sick patients in a non-sterile, noisy setting with constant vibration. Together, these undesirable conditions highlighted the need for a self-contained medical module that would better meet essential requirements.

Company engineers at Knight Aerospace listened to numerous aircraft crews’ and medical staff’s concerns before devising a solution and creating their stand-alone medical module that serves as an aeromedical bio-containment platform.

The aeromedical module features a high degree of structural integrity. To illustrate, the aircraft can potentially have a rough landing or skid off an icy runway. Here, the aeromedical module is designed to stay intact and remain in place. Therefore, the aircraft’s crew and the medical staff will not unexpectedly face infectious disease risks from the compromised enclosure.

The Royal Canadian Air Force (RCAF) has deployed the Knight Aerospace medical module during air evacuations that began during the Ebola outbreak. The RCAF has given the module a distinctive name: the Aeromedical Bio-Containment Evacuation System (ABES) for these Canadian operations.

While in flight, doctors are also equipped to perform fairly involved surgical procedures. Collectively, these capabilities make the medical module a healthcare delivery vehicle in places without any healthcare services.

Today, the world is seeing increased numbers of regional conflicts, most recently the Russian invasion of Ukraine. These stand-alone medical facilities, like those offered by Knight Aerospace, could be deployed near engagement areas, perhaps on amphibious transport vessels. In the future, the US and our allies may be involved in a near-peer conflict without air and/or maritime superiority.