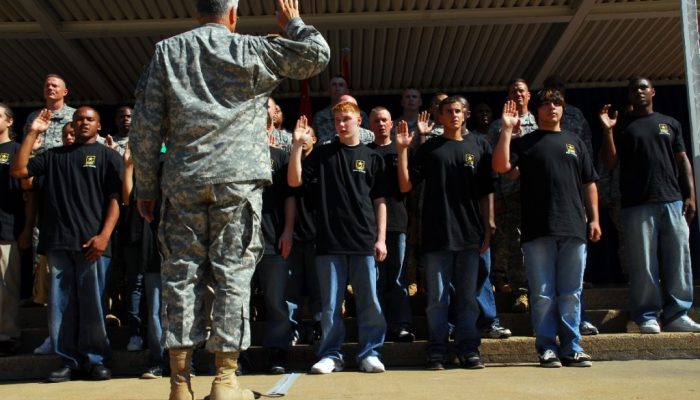 10 Things That Can Disqualify You from Enlisting in the Military

By admin
Recent Posts
Published on Feb 13, 2019 No Comments

There are many things that can disqualify someone from joining the military. Each division of the military has unique qualifications, but the military as a whole prefers candidates who have sound morals and are physically and mentally capable.

The following reasons explain why applicants can get disqualified from service:

Only US citizens and permanent immigrants who have green cards can join the military.

Only those who are under age 17 and over age 42 may join. The various divisions of the military have their own standards that might vary from this slightly.

Civilians who have credit issues or lots of debt are not eligible to join the military. Recruiters might be apprehensive about how it might be difficult for you to be dedicated to the mission if financial pressure or debt is an issue.

To join the military, applicants need to possess a high school diploma. In some instances, a GED will suffice, and in especially rare cases people who haven’t had a high school education are approved. However, remaining in school is crucial for a successful military future.

The ASVAB (Armed Services Vocational Aptitude Battery) test is the entrance exam and asks applicants basic reading, science, and math questions. Almost 25% of those who want to join the military cannot pass this test, which means they are ineligible to serve. Eventually, the underachieving academic system could create a national security problem.

Addiction, connection or consumption can be enough to ban someone from joining the military. An applicant that does not pass the drug test will be required to wait a period of 90-days before they apply again if they are allowed to apply again.

Candidates must be in good shape to be qualified to join the military. Any severe physical or mental illness can be enough for an applicant to be disqualified.

The most common reason candidates are disqualified from entering the military is obesity. This is another issue that could affect national security. If trends continue in the direction that they have been, by 2020 obesity rates could be up to 50%, meaning that just 2 out of 10 would be able to join the military.

While it doesn’t prohibit someone from joining the military entirely, but applicants who have a criminal background will need to get a criminal record waiver.

Many people wonder, “Can you join the military with a DUI?” but any crime that leads to conviction will almost always prohibit someone from joining. Technically, no one can join the military if they have been arrested for DUI before. Rare exceptions can occur if a recruit has a waiver.

Applicants who have dependents must be able to prove that another person sufficiently supports the children. Single parents aren’t ever normally allowed to join. People who have children and are married to someone in the military also cannot join.

While certain branches loosened their policies on tattoos, it’s still never acceptable to have tattoos on the face, hands, or neck.

These methods of expression could be grounds for ineligibility. Even the holes left after ear gauges are frowned upon by the military. One young man even went so far as to get cosmetic surgery after he was denied joining the military because of the holes in his ears.

The military can also decline candidates for reasons besides the things that have been included here. We should keep in mind that service is a privilege and not a right.